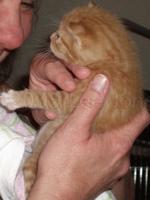 This is Vito, the new kitten that Cathy is hand-raising for the cat shelter. We just picked him up yesterday. He's is likely almost three weeks old. Some very kind people found him in their back yard. He had a cat mother until 5 days ago, when his mom just disappeared. The very nice people took the little kitten into their home, but cannot keep him due to family allergies. :-(

Well, they gave Cathy a call, and we picked him up. His hosts had named him "Evita" as he was crying so much. At first, we thought the name should be Evita, but as it turns out, all most orange tabbies are male (and all calicos are females); closer inspection verified his gender. Since the meaning of Evita is related to Eve ("life-giving"), we renamed him "Vito". It sounds manly and tough, doesn't it? 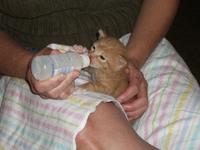 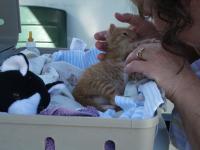 Vito has an excellent start. His immune system should be quite strong as he lost his mother well after receiving two weeks of milk. His eyes were just barely beginning to open when he was found abandoned for a day. Vito is already struggling mightily to walk around and has begun to play. He had the runs and fleas, but an adjustment to his diet and some cleaning will take care of these things. He should be ready to potty train shortly, so we probably will not have him around for more than a month before he finds a new home. That's good, as we shouldn't get too attached in that period.

It is cute watching the other critters interact with Vito. While we are keeping them separated for a time, the other cats and the dog are being allowed to observe vito from a distance. Zechariah has taken to guarding the new kitten, and Oliver watches over Vito as well. Malachi is curious but unconcerned. Fanny, however, feels mildly threatened by the newest baby in the family; I guess she wants to keep the status of youngest cat; everybody loves on the youngest cat! :-)
Posted by Lee Jones at 2:46 PM