Why I'll never buy a motorcycle

Desiring God put up a blog post entitled "How Barack Obama Will Make Christ a Minister of Condemnation" which states, in part:

At Barack Obama’s request, tomorrow in the Lincoln Memorial, Gene Robinson, the first openly non-celibate homosexual bishop in the Episcopal Church, will deliver the invocation for the inauguration kick-off...It is one thing to say: Two men may legally have sex. It is another to say: The Christian church acted acceptably in blessing Robinson’s sex with men...It means that Barack Obama is willing, not just to tolerate, but to feature a person and a viewpoint that makes the church a minister of damnation...In other words, to bless people in these sins, instead of offering them forgiveness and deliverance from them, is to minister damnation to them, not salvation...

I know that Barack Obama upset a lot of his gay and lesbian supporters when he invited Rick Warren to deliver the premier prayer at tomorrow's inauguration. But, the invocation will be delivered by Gene Robinson.

Tolerance is agreeing to disagree, a willingness to live and let live. Tolerance is not endorsement, nor does it mean the absense of meaningful dialog on the points of disagreement. Today, however, tolerance has become a means of enforicing the idea that anything goes, and to disagree is bigotry. This is unfortunate, as many Christians fall prey to this trap.

It is very, very important to always remember; people need the Gospel of Jesus Christ, a saving grace that forgives and redeems. However, a false gospel, one that blesses choices which lead to eternal separation from God, is not just a tragedy but a travesty.

In reading this article, please remeber - people need the Gospel. In our attempt to live in harmony, we must always remeber that people need the Gospel more than they need for us to not offend them. And it is important for us to love them enough to tell them the truth, especially truth that offends. The temporary approval taht we as Christians grant by endorcing sin lead to eternal consequences.
Posted by Lee Jones at 10:44 PM No comments:

Just found out that Krispy Kreme is giving out donuts (your choice) on Inauguration Day. So, on January 20th, Cathy and I will be hitting one of the participating stores. Yipee!
Posted by Lee Jones at 9:51 AM 1 comment: 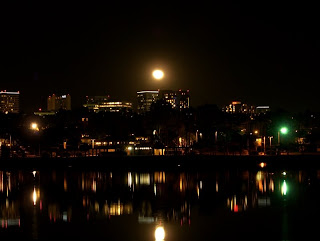 Son of Hamas Leader Turns Back on Islam and Embraces Christianity

Mosab Hassan Yousef was born the son of one of the most influential leaders of the militant Hamas, but has now renounced his faith, left his family behind in Ramallah and is seeking asylum in the U.S.

In light of the conflict in Gaza, this was an interesting article to read. FTA:

"So definitely I started to figure out the problem is Islam, not the Muslims and those people — I can't hate them because God loved them from the beginning. And God doesn't create junk. God created good people that he loved, but they're sick, they have the wrong idea. I don't hate those people anymore but I feel very sorry for them and the only way for them to be changed (is) by knowing the word of God and the real way to him."

I read this article with interest, because a friend had posted a link to a New York Post article which essentially says that Hamas brought on Israel's invasion through their own actions. I feel truly ambivalent about the conflict in Gaza right now. This article, though, reminds me that there is still hope, at least for individuals and families, one at a time.
Posted by Lee Jones at 1:54 PM No comments:

...I'd rather my fans not read this version of Midnight Sun. It was only an incomplete draft; the writing is messy and flawed and full of mistakes. But how do I comment on this violation without driving more people to look for the illegal posting? It has taken me a while to decide how and if I could...

I'm sure all the other fans of Twilight have already seen (and maybe read) the partial draft of Midnight Sun, assuming you did not heed Meyer's plea to wait for the finished product.

Anyway, the continually changing 'partial draft' of Midnight Sun is available at the author's website, thus saving you from snooping around the darker corners of the Internet. :-p
Posted by Lee Jones at 11:18 AM 36 comments: