As weird as this may seem, Micrsoft is giving away Microsoft Office Accounting Express 2007 (Windows only). Aside from being a possible replacement for the "Basic" versions of off-the-shelf accounting packages, it has a few interesting features:
It does not manage inventory, though. For more features, check out this link.

Download Microsoft Office Accounting Express 2007 from this site here.
Posted by Lee Jones at 11:06 PM No comments: Links to this post

Can You Think of Anything Scarier?

Bill Amend is a funny guy. He draws FoxTrot, prefers Macs, and occasionally pokes fun at current events. The Sunday strip from Oct 29th illustrates something I have been following with great interest for almost three years: electronic voting.

What's interesting about this strip is that everything Jason Foxtrot says is true. The unamed machine is manufactured by Diebold Election Systems, and Jason is wearing the Diebold AccuVote-TS.

If you do not yet know, Diebold's voting machines have been mechanically unstable and security flaws have been pointed out from day one. Diebold has become infamous in other parts of the country for practially ruining elections. California actually sued Diebold (and won).

To give the alleged security flaws some street cred for the highly educated, you can check out the Security Analysis of the Diebold AccuVote-TS from Princeton. For the rest of us, just reading the headlines from Techdirt on "Diebold" should give you a taste of the flaws which have plagued Diebold voting machines from the beginning.

And yet, people really don't seem to care. I suppose when voter turnout is already low, it shouldn't surprise me that this kind of thing does not concern people. With Halloween around the corner, I think the comic is timed very well.
Posted by Lee Jones at 10:55 PM 2 comments: Links to this post

A Peek at My Philosophy of Missions

Gardner & Rebecca Kerin are missionaries to the Buryats in Eastern Siberia. Gardner spoke at one of my classes last week. A couple of students, including myself, grew up in the mission field and had a productive time reflecting on ways that those of us who stay behind can support those who are sent.

The following is a peak at my philosophy of missions, formed partially by my childhood in Taiwan, but also by conversations with my lovely wife (who is more qualified to speak on the issue than I).

• Build a relationship between the church and the missionary; limit the number of relationships and strengthen the ones that exist.
• Every missionary needs a lay person to champion them, to maintain the attention of the congregation.
• Adoption allows for a sense of belonging and fellowship.
• Communication and continuity keep the missionary “in the loop” regarding changes affecting them.

A missionary needs continuity with their sending church. Missionaries rely on their sending partners for financial support, but they also need spiritual support via prayer in addition to emotional support available only through relationships. Missions Chairs should remain incumbent for as many years as possible; the Chair should also maintain a strong relationship with each missionary. With the mobility and turnover of families, a missionary’s original supporters may move and change churches during the missionary’s terms. Missionaries need to be informed regarding turnover in the Missions Chairs and, if possible, their supporters. In this way, we can reduce the emotional shock that missionaries experience upon their return to the “home” church. Remember, this is difficult, not only for the missionaries, but also for the kids.

There was much more I would have like to write (perhaps some other time) regarding this matter. My wife & I support three missionaries right now, and we love them very much. It seems odd, to me, to when people exhibit a

This past Sunday, one of our church’s missionary families was home to visit. One pastor asked people to gather around them during the next song to pray for them. I went forward, expecting to join two dozen others… instead, I joined the pastor and two couples in praying for these missionaries from our church. I prayed for them, looked them in the eye, and told them, “Thank you.” As I returned to my seat, I was shocked, amazed, and wondering, “Where were the others?”

Another couple friends of ours currently intend to go to Cambodia, and we had dinner with them. We discussed some of the things I have written here; my wife and I have decided to pray about getting involved on the missions board and, perhaps, help our church better support our missionaries.
Posted by Lee Jones at 4:13 PM 1 comment: Links to this post

Microsoft Windows Defender out of beta

Microsoft Windows Defender is now out of beta. Free, it requires Windows XP, and I would suggest that you run a Windows Update before installing it.

via Downloadsquad
Posted by Lee Jones at 12:48 PM 2 comments: Links to this post

A little catch up (or keep up, I suppose).

Boaz, natrually, it getting cuter and cuter. He is now 40 days old, so he'll be six weeks old this Thursday. He'll be neutered soon, and ready for adoption. Just in time, since our apartment will soon get crowded once again, with my mom-in-law moving back in with us.

My brother-in-law, Jerry, was kind enought to come up to help me with the bathroom tile last Wednesday. He got the tile started and he tiled the window; the rest of my tub surround is within my skill level. I discovered that I can tile rather quietly, so I'll be working late into the night to complete this job.

I was soooo stressed out about this tile job. When Jerry promised to come out and help me, immediately I felt my spirits lift. Hope is a powerful thing... kinda like the hope of the resurrection giving strength to people who are ill or dying. Anyway, to say the least, I am thankful to my brother in law!

Money is really tight right now; the remodel, having taken so long, has sapped our bank account. Lord willing, we'll rent it out November 1st and get some semblance of normacy back again. That also means that my mom-in-law will move back in next week, causing no small disturbance as we all get used to bumping into each other again. *sigh*

Other interesting things: I wrote a sermon on the aforementioned topic of death. That post, and the post on identity, drew the most comments, but primarily in the form of emails directly to me.

I presented the sermon in a homiletics class and was critiqued by my peers as well as my professor. I am afraid to post the video... I posted a sermon from last year, and frankly I stunk as a preacher then. I must admit that this sermon is much improved (I've had practice), but some elements of this sermon need to be rearranged. With the input I received, my revised sermon should be much, much better.

Oh, yeah... we got a webcam at work, which nobody else is using, so I've been playing with it. I'm thinking I may use it to do time elapsed video of how a server gets assembled, but I'm not sure, yet... too much other stuff going on!

Finally, my parents did receive my letter I sent at the beginning of October... yesterday. It took three weeks for them to get my letter! Something must be wrong with my address, so hopefully I will soon be able to get it right!
Posted by Lee Jones at 4:29 PM No comments: Links to this post

File Under: Keeping Up, Remodeling 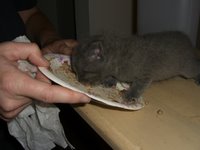 Boaz the Kitten is eating solid food now for his dinners. His first meal was on the 13th (yes, the Friday). He's coming along great; he's eating real food now, he is getting bigger, and he's starting to walk on his toes!

Posted by Lee Jones at 5:39 PM 2 comments: Links to this post

The latest with Cathy - Gluten!

Well, we think Cathy is also gluten intolerant (commonly due to Celiac Disease).

So... about 14 months ago we started a series of tests that led us to understand that Cathy has two liver diseases: Non-Alcoholic Fatty Liver Disease (NAFLD, caused by Celiac Disease, we think) and Hepatitis C. Hepatitis C is a viral disease that attacks the liver, and it probably triggered the development of Celiac Disease, which in turn caused the NAFLD. It is supposedly quite common fo Celiac to stay hidden until triggered, such as by a large virus.

The side-effects of the Celiac Disease include rashes on Cathy’s body. The treatment for Hepatitis C may not have caused Cathy's skin problems, after all. We, so tossed out all the gluten we could from the house (including th cat sand).

We're adjusting rather quickly to the new thing, I think.

UPDATE 10/12/2006: Cathy saw another specialist and they want to do a skin biopsy, so she has to intentionally have some gluten to get a rash for the biopsy. Crazy, huh?
Posted by Lee Jones at 12:52 AM No comments: Links to this post

File Under: Cathy, Keeping Up 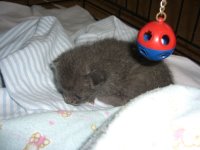 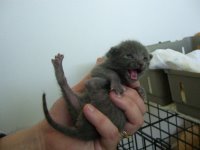 A quick update on Boaz... His appetite has increased greatly and he is much more active. He must ave doubled in size since my last post! His ears get getting much larger and closer to the top of his head; so cute!

I also have a few videos to upload. Now that Google has acquired YouTube, I'm wondering if my videos will get migrated...
Posted by Lee Jones at 12:50 AM No comments: Links to this post


As bizarre as this is, I finally found a way to call Taiwan for free. I already called Morrison Academy in Taichung, Taiwan and got their answering machine. No software required, and free until at least 2010... I have NO idea how they can afford to do this, although it does remind me of the old telephone "extenders".

For example, to call Taiwan, just

So, if you have any friends or family overseas (check http://www.futurephone.com/ for countries supported) try this service.
Posted by Lee Jones at 1:10 PM 1 comment: Links to this post