I was updating my BlackBerry apps and noticed that Google Sync for BlackBerry now includes Google Contact synchronization. You can upgrade from Google Mobile Apps on your BlackBerry (select the "More" option, highlight the Sync icon, and choose upgrade), or you can visit m.google.com/sync from your phone and install or upgrade.

I am using a BlackBerry Curve 8320 and OS 4.5. Google Sync does two-way contact and calendar sync and it is working for me. I am very happy to finally have contact synchronization.

I had just signed up for Soocial, but their BlackBerry sync is still missing.

This move from Google is welcome; I was beginning to think they only love the iPhone and forgot us BlackBerry users. :-D
Posted by Lee Jones at 12:25 PM 2 comments: 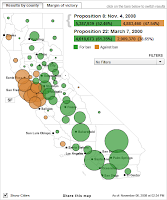 This is a telling comparison between Prop 8 and Prop 22. Prop 8 passed by a very narrow margin, while Prop 22 passed by a large margin.
Posted by Lee Jones at 10:45 PM 3 comments:

I am surprised, but it seems Prop 8 is going to pass. I honestly thought, in spite of all the signs and propaganda I had heard, that Prop 8 would be defeated.

Cathy and I met a married lesbian couple while waiting in line at Ben & Jerry's last night. At the time, No on 8 was leading by about 3%, if I recall correctly. We discussed Prop 8 and wondered what its passage might mean for their family. I doubt that the California courts would retroactively dissolve marriages joined this year. According to Joan Hollinger, a professor at the University of California, Berkeley, Boalt Hall School of Law, "Constitutional scholars agree that the amendment cannot be effective retroactively."

I was also assuming that many others would be rushing to get married before Prop 8 goes into effect; I probably would. But, yesterday may have been the last day for gay marriages:

“A proposed [legislative] amendment or revision shall be submitted to the electors and if approved by a majority of votes thereon takes effect the day after the election unless the measure provides otherwise. If provisions of 2 or more measures approved at the same election conflict, those of the measure receiving the highest affirmative vote shall prevail.” See Cal. Const., Art. XVIII, Sec. 4

However, marriage license will likely be issued for the coming month until the state health department directions California county clerks to stop.[1][2]

Not only did California voters ban gay marriages, but bans also passed in Florida and Arizona.

I would say that would be the end of gay marriage in California, but Prop 22 (from 2000) was struck down in May. Prop 8 used the identical wording, but this is an amendment to the state constitution, so I don't know if it can be challenged and struck down like Prop 22.

All in all, these are interesting days. I thought for sure, with a huge Democratic turnout, that Prop 8 would pass. I was wrong.

One final note: I really hope and pray that conservatives and Christians won't be jerks about the results. Peoples' lives were changed today; compassion and love should rule the day. Jesus Christ would have it no differently.
Posted by Lee Jones at 9:33 AM 2 comments:

Wow, a historic night. Barack Obama has the President Elect and the first non-White President of the United States of America. I hear many people are celebrating the election of our first mostly African-American president.

I've been getting my election results online, of course.

Google has a 2008 Elections Gallery that is pretty cool. For general numbers, like electoral votes and House and Senate results, I've simply referred to the Google News Elections landing page.

For California propositions, I've been following the election applet at the LA Time. I like this applet for the "margin of victory" tab. The search for the propositions link goes directly to Proposition 8, so that must be what the LA Times site visitors deem to be most important issue?

I am glad to see Prop 2 (Farm Animals) is winning by a large margin. :-) That makes me very happy. I guess I'll wake up tomorrow to see all the final results.
Posted by Lee Jones at 11:39 PM No comments: