Photo: Vito is Growing Up!

Vito is certainly growing up! Over this last week, Cathy weaned him, so Vito is now off the bottle completely! He is also potty-trained now, so he's free to roam the aparmen for longer periods of time with less supervision. Vito has taken a liking to Rhonda, but she is trying real hard not to get attached. :-)

We've been trying to do better with each litter. This time, we're acclimating Vito to the dog. We didn't do that with Fanny, and she can't stand Oliver. We're also trying to get Vito used to being fed by different people, and different foods. Vito has gotten used to the dog already, and we've had as many friends handle him as possible.

In fact, Laura came over to visit yesterday. She stayed for quite a while and delighted Cathy with her company; she's actually the first friend to visit Cathy. Anyway, here's Vito relaxing in Laura's arms. 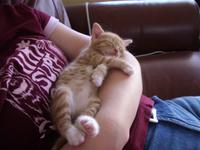 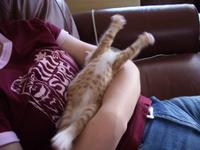 Zechariah, our tuxedo, is very mothering to Vito. She taught him to bathe. Our mom (Rhonda) has a 7-month-old kitten, and he's been playing with Vito. Malachi tries to play with Vito but isn't sure what to do with him just yet.

I have uploaded videos of Vito running, wrestling, and bathing. The links should go live in less than 24 hours.
Posted by Lee Jones at 7:25 PM